Yet another very quick update, since time here is limited and the activities are endless. We’re currently at the InterContinental Bali after arriving last night, and there are no words to describe this place. This is a case where a picture really is worth a thousand words (and since I already have hundreds of pictures, we’ll be looking at a lot of words!).

Well, let me take it from the beginning really quickly. Our flight from SIN-DPS was totally packed, and as we arrived there was a guy with a massive InterContinental sign that had my name on it. There were two people that greeted us, took our passports, and escorted us to the Club InterContinental lounge at the airport. There was an American family sitting across from us in Business and as we were greeted we heard them say something along the lines of “Who are these people that they get that kind of service?” Gave me a good chuckle, since I was wondering how the hell a family of four could afford to sit in business class (two award seats is one thing, but four?!?!).

The service continued in a similar manner. After being offered drinks and hot towels in the lounge (never even going through immigration, just being escorted through the back door) we were eventually picked up. They had retrieved AJ’s checked bag, gotten us visas, and done all of the arrivals stuff for us.

We were then driven in a Jaguar to the hotel, where we were immediately escorted to the Club by a butler. There we were once again offered drinks and towels and treated like royalty as we checked in. The agent said something along the lines of “We upgrade Royal Ambassadors to Duplex Suites from the room you booked, but those are all taken so we’ll upgrade you to our best room…” She took a good ten minutes to explain what we get as club guests, and then had our butler escort us to the room. Every employee we’ve dealt with has been beyond gracious.

The room itself (well, it’s not really a room) is ridiculous. There’s a huge living room with two couches and chairs, a dining room, a small kitchen, a guest bathroom, another couch in the bedroom, a desk, a huge bedroom, a massive master bath, and best of all a balcony about as big as the rest of the room.

Oh, and on a slightly different note, two things I feel like sharing as well. As we arrived in the hotel car we were stopped at the gate where there were guards that looked with a mirror under the car and also in the trunk. At first they looked real serious, but then they waved and said “welcome.” There are also “security guards” walking around the hotel with machine guns.

Oh, good point - I hadn't thought about the seats you were using!

Good point Laura, but at the same time we were taking up two award seats, so that must mean a lot of award seats on that flight. Oliver, too funny. :D

Your story of how you were whisked past security reminded me of my own experience. We didn't get any of the royal treatment and instead queued up with the other unwashed masses at the passport/buy-your-visa checkpoint. As it was clear it would take a bit of time, I left my wife in the line and went to the bathroom. In there, I was approached by a security guy in uniform who offered to get me through security in an expedited fashion for a small tip ;) Needless to say, I didn't want to get caught in some sting operation five minutes into the country and declined with a smile. 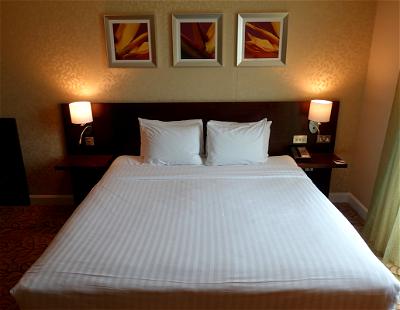