Since 2012, Delta has been executing their oft-touted – but rarely experienced – “Surprise and Delight” program. The concept is simple: select Diamond Medallion members with tight connections in hub airports are met at their arriving flight by a Delta representative, walked down to the tarmac, and whisked away to their connecting flight via a Porsche.

The following Delta hubs currently have this program in place:

The program doesn’t get much publicity from Delta’s side – likely because it’s very much not a guarantee, and is intended as a surprise service for select Diamond Medallions. As a matter of fact, the entire Delta website devotes a grand total of three paragraphs to the program.

Personally, I’d been hearing rumors about this elusive program for several years, and had even seen a Porsche out of my window once or twice, but beyond that, my belief in the program’s existence ranged somewhere between Santa Claus and unicorns.

Well, last week I learned that unicorns do indeed exist, in the form of Porsche Panameras. And they even come with massage seats and personal photographers.

My experience with Delta’s Porsche ride

I was flying my fairly typical route from Hartford’s BDL to San Francisco’s SFO, this time with a connection in Delta’s Minneapolis-St. Paul hub. A flash snowstorm had forced us to deice prior to takeoff and had us slightly delayed upon arrival.

To add insult to injury, I was connecting from the C gates to the G gates which, contrary to common knowledge of the alphabet, are pretty much clear across the terminal. Not tight enough of a connection to miss my flight, but enough to warrant some preemptive quad stretches while we were waiting for the jet bridge.

So you can imagine my surprise (and delight!) when I stepped off the plane and was greeted by a petite woman holding a clipboard who asked, “Hi, are you Ms. OMAAT?”

(Okay, that’s not exactly what she called me, but you get the idea.)

Greetings and formalities aside, I was most stricken by two thoughts:

Fortunately, she didn’t bat an eye when I choked out a flabbergasted “I can’t leave without my luggage,” like it was the first time she had picked up a passenger with a gate-checked bag. So off we went to the baggage cart on the tarmac.

My first aviation geek moment came when we deplaned via a separate staircase off of the jet bridge – a first for me.

(Apologies in advance for the quality of the photographs; Minneapolis isn’t exactly known for an abundance of daylight around the winter solstice. But that didn’t stop me from trying.) 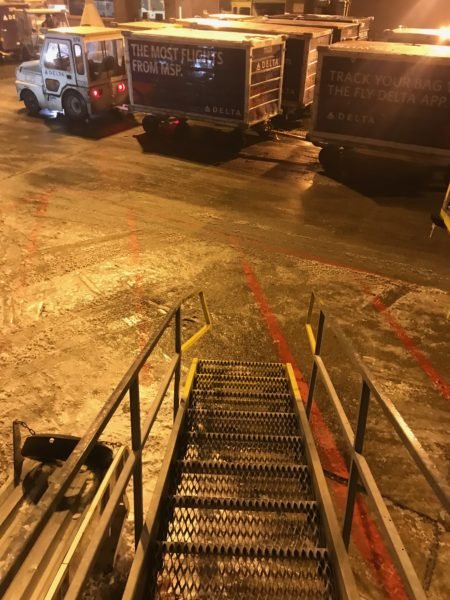 Side note: this was probably not the best day for me to take a new suitcase on its maiden voyage – I was a little embarrassed when she asked me what color my bag was and I couldn’t give a definitive answer.

Luggage confusion aside, just hanging out on the tarmac by the planes was enough of a treat in and of itself. But of course, my chariot awaited: 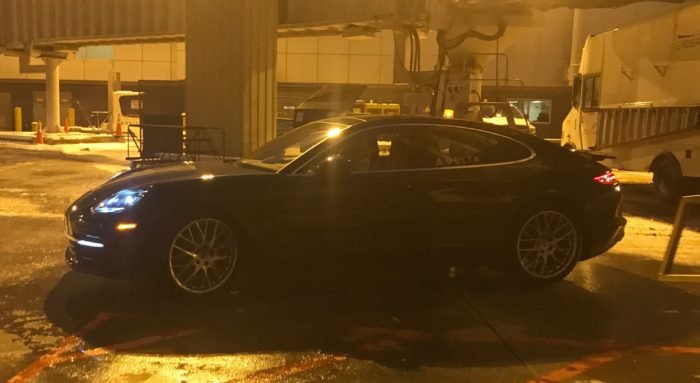 We zipped around MSP’s tarmac to the G gates, and my driver offered to take her time so that I could enjoy the ride and check out the planes. I asked her about how she liked her job, and she showed me how to turn on the massage function in the passenger seat (because there is such a thing, apparently).

Before I knew it, we were at my departing gate. I snapped one last picture of the Porsche and she carried my suitcase up the stairs (which I decided were built for elves, given that they were only about five inches tall) 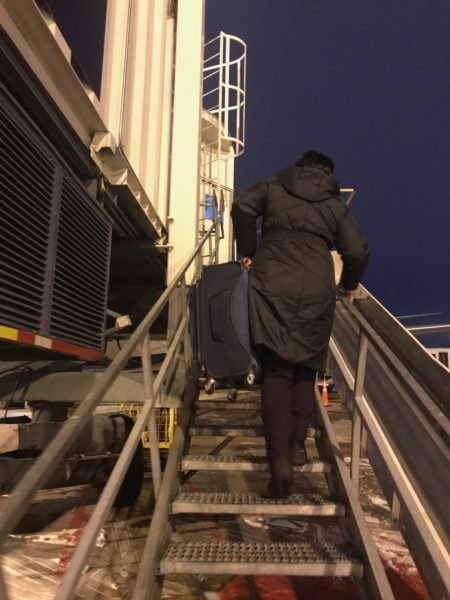 The plane wasn’t quite ready for boarding, so she escorted me back to my gate. I thanked her profusely, and off she went to go make someone else’s day.

The trippiest part of the whole experience was going backward through the jet bridge of my new plane and watching her unlock the door into the terminal.

While I was giddy with delight, I put on my best “act like you’ve been here before” face and hunkered down to try and learn more of the program. For the sake of the blog, of course.

Our time together was roughly ten minutes, but she filled me in on the following:

Anyway, that’s the most I could squeeze out of our ten minute ride, which ended with the obligatory photograph (I wasn’t planning on modeling during this particular flight, so please be nice…) 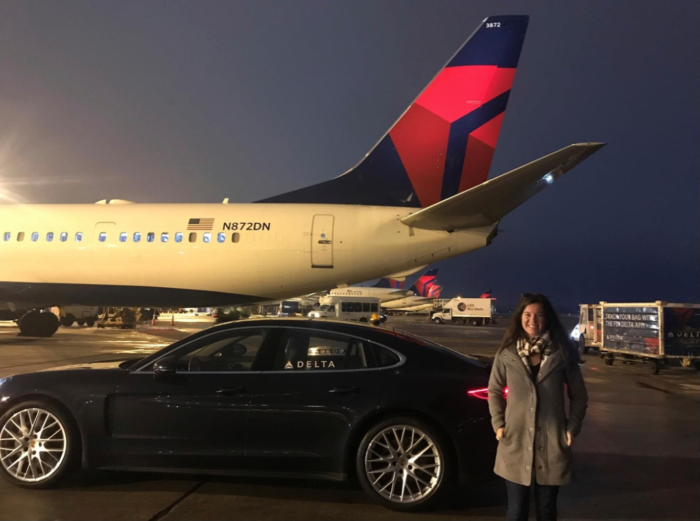 How to score a Porsche ride

First off, unless you are a Diamond Medallion doing the weekly grind, you probably won’t.

Beyond that, it’s a crapshoot. I know of someone who has flown upward of two million miles and has yet to see the elusive vehicle pull up, while I’ve talked to weekly road warriors who can rattle off airport-by-airport statistics of which models of Porsche are on offer.

So, to the best of my knowledge, here are the steps that I would take in order to tip the German automobile scales in your favor:

Oh, and in case you’re wondering – I was traveling on an economy award ticket, so I’m pretty sure fare class isn’t a deciding factor. And I’m approximately 150% positive that no one at Delta knows that I’m “Ms. OMAAT.”

With the stringent new spend requirements and my Diamond Medallion status set to expire at the end of January, this was almost certainly a once-in-a-travel-lifetime experience. But with airlines hacking away at frequent flyer benefits left and right, it’s a rare treat when a top-tier elite truly feels special.

And for those ten minutes, that’s exactly how I felt. From the element of surprise, to the behind-the-scenes tour, to the ride in a car that costs more than a starter home in some markets, it was like attending a crash course on customer service.

In this particular case, Delta nailed it.

So while I can’t really give much in the advice of how to score one of these rides, I can confirm that they are absolutely worth every ounce of hype.

Have you ever gotten a surprise airport transfer, on Delta or otherwise?

So I recently gotten the infamous Porsche transfer. I was leaving BOS and connecting through JFK. There was a slight delay but I still had about a 90 minute layover with the delay. So the flight attendants announced over the intercom there's a message for xxxx. I'm thinking wft did something happened . But I was met with a agent with my name on a sign and we went down the stair well, I definitely shocked. Because it's definitely a rare thing that happens and I got this service twice so far. This is my first time getting it as a Diamond member. I also had this service in 2019 as a platinum member in DTW ( so diamond status isn't necessarily a factor per say). I will say I was at my next gate and was questioned by a fellow passenger from my previous flight about the ride and why she wasn't chosen. If and when you get it definitely take pictures and a mini video if possible. It's definitely a once and a lifetime type thing for most people who get it.

I got my Porsche pickup today. I was QUITE surprised and yes, I had to get photos and video of being on the ground with the planes.

It’s a great treat - I’m actually on a Delta flight right now trying to score one at LAX. I’ve had this service with Lufthansa at Frankfurt whenever I’ve passed through on a first class international itinerary, 12 times or so over the years. The first class terminal is amazing! I was coming back to PDX from Helsinki via Frankfurt with my wife a few years ago. She didn’t know I had scored a couple 1st class tickets on the A380 flight to SFO. We landed in Frankfurt and the flight attendant announced that we had two first class passengers on board so remain seated while they deplane. I said to her, “that’s you!” We got off to an awaiting Porsche which whisked us to the 1st class terminal. It was a bit better than the bus that was waiting for everyone else. 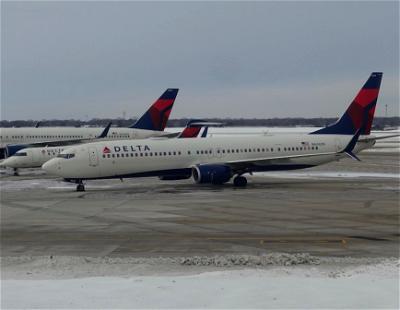