As reported by Musings of the Global Traveller, bmi’s Diamond Club program will be merging into Lufthansa Miles & More by mid-2011 at the latest.

For those of you not familiar with bmi, they’re a great airline to credit miles to, even if you never fly them. They offer double miles (both redeemable and elite qualifying) for most Star Alliance paid business class itineraries, and triple miles for first class itineraries, which is very generous. Beyond that, they have some very low Star Gold qualification and requalification levels (just 38,000 status miles to requalify). And they also have great redemption opportunities.

The good news is that bmi Gold status will likely be converted into Lufthansa Senator status. The thing that’s really valuable there is that as a Senator, you get 50% off a companion award reservation (including first and business class). Still, their award prices are much higher otherwise. Though you just know you want to walk into the Senator lounge at Dulles airport with your Senator card, for once, instead of sending United the bill. 😉

The real losers, though, are those that were going for lifetime status with bmi. If you’re a bmi Gold for ten years in a row, you get that status for life. While Lufthansa has a similar lifetime status program, you have to be at least 60 to be given lifetime Senator status. So to the 30 year olds that have been bmi Gold for seven or eight years, tough luck, it would seem.

The one other thing worth discussing is how to burn those bmi miles, now that their program is going away. They do have a cash and points option, whereby you can use fewer miles and pay a cash supplement, which is tempting, though I don’t like spending $1,000+ on a pair of award tickets, so I’m shying away from it. bmi also charges fuel surcharges, which is the only reason to fly US Airways — they’re the one airline that doesn’t charge fuel surcharges. So if you were to book an award ticket on US Airways using bmi miles, you wouldn’t be charged a fuel surcharge — and their new Envoy Suites available on select routes do look nice. Maybe it’s time to fly a US Airways A330-200 to somewhere?

British Midland Diamond Club to continue operating independently… for now - One Mile at a Time Guest
February 10, 2011, 1:39 am

[...] would be merged into Lufthansa’s Miles & More program by the middle of this year, as I wrote about six months ago. British Midland has a great frequent flyer program, preferred by many to Miles & More. While [...]

@ Ben -- Awesome! As a huge fun of LH and LX first, I am pretty excited about the prospect of becoming a SEN and using those miles for the Companion Awards. 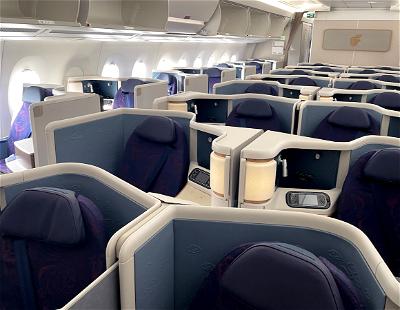