There’s another first-hand account of the events that led to the altercation between the flight attendant and the mother of twins onboard an American Airlines flight recently.

Previously, we really only had video of the aftermath of the situation which mostly consisted of a woman sobbing in the front of the cabin and a first class passenger trying to aggressively defend her. We didn’t know much about what went on to cause all of that.

Well, this version provides a good bit of detail about what went on at the back of the plane. “Eric” was a passenger seated toward the back of the plane. He shared what he observed with Gailen Lee David who posted it on his Facebook page. I think before we go any further, it’s worth pointing out that David is a former American Airlines flight attendant who was fired by the company. That may or may not influence what he posts, but it is worth noting.

Anyway, Matthew over at Live and Let’s Fly did a nice job of formatting “Eric’s” story to make it more readable so I’m going to share that version here.

I was on this flight directly across the isle from the woman filming the video. This is what I observed:

1.) woman gets on the plane pushing a car seat type stroller with one child in it, carrying a second child on her hip and dragging behind a very large folded stroller that was too big for the overhead bin or to go under a seat.

2.) the flight attendant shown in the video approached from the back of the plane and informed her in a calm manner that there was nowhere to store the stroller. The woman immediately escalated the situation and within about 30 seconds was screaming at him at the top of her lungs.

3.) the flight attendant evidently decided she was not fit to be on the flight (in my opinion the correct decision) and started to move her and her children towards the front of the plane.

4.) when they got to the from of the plane the woman decided she was not going any further. The flight attendant picked up the stroller and lifted it over his head to try and move past the woman. As he was doing this she pushed him and the stroller fell a bit and struck her in the face. She began crying loudly and dramatically. Shortly after this is where the video begins.

5.) The first class passenger then inserts himself into the drama with his faux chivalry but clearly has no idea what has transpired in the back of the plane since he was in a window seat in the first class section of the plane and could not have viewed the incident from his seat.

6.) after another 10 minutes or so the woman exits the plane only to be returned about 5 minutes later and taken to her seat. We wait another 30-40 minutes while various flight and ground crew come and go speaking to the woman. After about 40 minutes she deplanes again this time telling all of the passengers, who are now becoming vocal in support of the flight crew, that all she wanted was an apology from the flight attendant. Evidently that’s what the 40 minute delay was all about. Then we waited another 10 minutes for the ground crew to find and remove her luggage from the belly of the plane.

8.) when I entered the bag claim area the first class passenger was right in front of me and as soon as he made it through the revolving door there was a camera crew waiting for him on the other side to interview him.

That’s about as factual of an account as I can provide and I realize there may be other parts of this story that I do not know about or did not witness.

From what I saw:

a.) if anyone from American should have been punished it should be the ground crew who somehow letting this woman on board with a full size stroller. The flight attendant was put in a horrible situation by a passenger that most passengers in my immediate area thought seemed unstable. She escalated the situation, not him.

b.) in my opinion, the first class passenger should have been removed. Had the flight been in progress he might very well have been arrested upon landing for threatening a crew member. Additionally, he could not have seen any of the back of the plane antics of the woman based on where he was seated.

c.) I agree the flight attendant may have reacted too harshly in responding to the threatening customer in first class, but his actions with the woman in question were professional throughout the ordeal. I am disappointed American has chosen to punish him.

I think this account of the story jibes reasonably well with what we had already heard. I can imagine that the flight attendant did approach her calmly as he should have. But then she escalated the situation, and he escalated it some more. And then the cameras started rolling, and here we are.

In my mind, there’s really no justification for a flight attendant to respond that way even if she did yell at him. And it seems like American agrees based on their statement.

I’ve flown on dozens and dozens of international flights with kids, and I simply cannot imagine this situation happening on an Asian or European airline. (Or really anywhere else.) Why are our US flight attendants so quick to escalate a situation? Certainly they don’t all do this — it’s really just a few bad apples — but it seems that these incidents happen with far greater frequency here than anywhere else in the world. 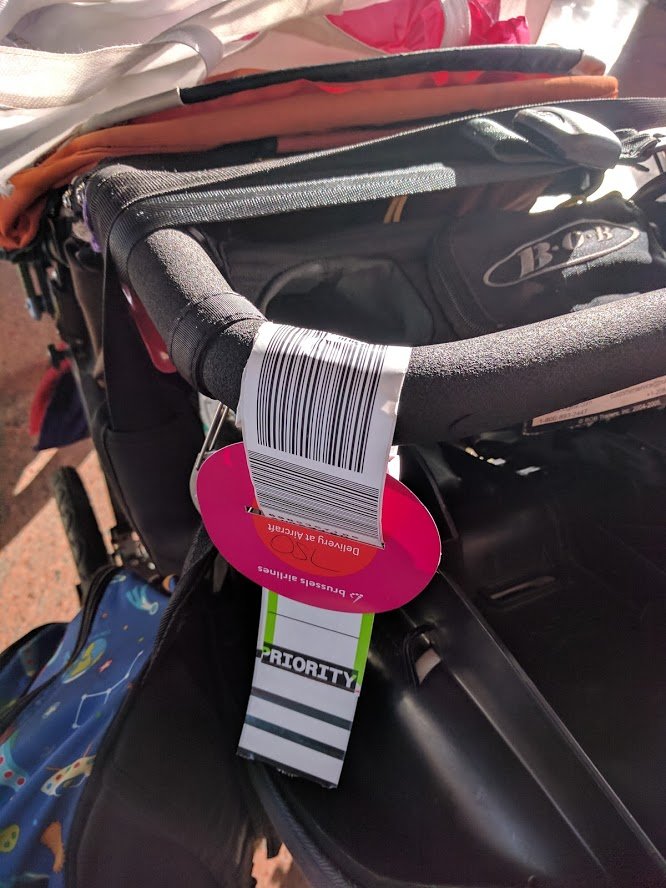 I think this account helps shed some more light on what took place at the beginning of the strollergate incident. I can pretty easily imagine that the male flight attendant approached her calmly and that she responded by raising her voice at the flight attendant. Traveling with kids is tough. My wife, who is a very experienced traveler, has certainly raised her voice at a few flight attendants over the years who were trying to tell her how she needed to do something related to the kids. But you’re not going to help the situation by yelling back at her — I’ve learned that the hard way.

And no matter how right you think you may be, you’ll never win in the court of public opinion by yelling at a mother with a baby in her arms.

What do you make of this new bit of information?

I've flown Chinese airlines MANY times and have NEVER seen what you described (flight attendants slapping electronics out of people's hands). And when I've been told to to turn mine off, it's always very politely and never aggressively. I can't really picture an non-american flight attendant yelling at passengers like that.

I think I can see the incident from both sides having been in the passenger's shoes a time or two, and also having had a son who was employed by the airlines for many years. I know that the woman travelling alone with two babies was stressed and edgy, while the FA felt pressed to get the flight boarded and away from the gate. The entire "situation" could have been avoided by having the woman's strollers tagged and put in the hold at the door of the jet. If the passenger needed assistance with her infants when changing planes, a wheelchair or courtesy cart could have been arranged to transport her to her connecting flight. This would have eased things for her, the flight crew AND the rest of the passengers, getting them off the ground on time.

Hi Travis, You mention high tension. America is a competitive country, many high stressed, high paying jobs (some not so high paying but still stressful) for people. This includes the crew as well as the passengers. The tension in America just got alot higher the last two weeks whether many realize that or not. Love of what we do, passion and compassion can solve many of these situations. "That" is not in over supply in America at this time (it exists surely as we see stories, we experience it ourselves in our lives of goodness in people). We all have this wonderful compassion in our hearts. The competitive society does not persuade us to show it. But surely we have all observed it, we see it when people bring flowers to the point of incident to remember the fallen person, police or other. Some bring thoughts, some bring prayers. They are allowed, they are not encouraged. Let us encourage them. God Bless.