A couple of weeks ago I posted a new poll question asking whether y’all tip housekeeping when staying at hotels. The results so far?

Anyway, the reason I asked the poll question to begin with is because this is a question I’m often asked by readers. I wanted to see how you guys felt before sharing my stance. As I expected, the topic caused quite a bit of heated discussion, much like discussing seat recline in coach and infants in first class.

Let me start by saying this — unlike most, I don’t completely hate the tipping culture in the US, at least for customer facing jobs. In the example of waiters, they have to be paid somehow. Either their wages will be incorporated into the cost of food (as is the case in Europe) or they won’t be incorporated and the consumer has the discretion as to how much they tip. This results in, for the most part, good/attentive service. Compare that to Europe, where it can often take a long time to flag down a waiter.

I’m also a very good tipper in situations that I think warrant tipping.

All that being said, I don’t tip housekeeping unless I have a special request or my room is especially dirty. So I guess I’m with the majority of you (56%) that don’t think “normal” housekeeping services warrant tipping.

What it comes down to for me is that I don’t believe in tipping if an employee:
a) makes at least minimum wage
b) isn’t providing a “skilled” service
c) isn’t in a customer facing position and goes out of their way for me

What I guess I don’t understand is why housekeeping should be tipped but not the front desk clerk that checks you in? I’ve never heard of anyone tipping the front desk clerk unless they’re trying the $20 trick for a room upgrade. Or what about flight attendants (especially in first class)? They literally serve you for hours and aren’t paid especially well, so why shouldn’t they be tipped?

For me it’s all very similar to airline fuel surcharges. Airlines sell you tickets to Europe where the fare is only half of the cost of the ticket. The base fare might be $400, while there are $400 in fuel surcharges on the ticket. You can’t fly a plane without fuel, so the concept of unbundling the two is bizarre to me.

Similarly, when I book a hotel room, I buy a room that has been serviced. It’s the product I’m buying. I understand housekeeping is often poorly paid (though makes more than minimum wage), but at the same time where does one draw the line between tipping an amount that reflects the service provided and feeling sorry for someone and essentially making a “donation?”

Anyway, just my two cents. The discussion was honestly eye-opening for me since I didn’t realize so many people tip. I’ll certainly view housekeeping differently, and at the very least be sure I continue to tip if my room is a bit messier than normal or I have a special request. But I just can’t rationalize tipping them for a serviced room without any special requests, at least not before I start tipping flight attendants, gate agents, or TSA agents (after all, they provide me with a bi-weekly massage).

Submitting...
Featured Comments Load all 49 comments Most helpful comments ( as chosen by the OMAAT community ).

Traveling is rarely a luxury for me and it's preposterous that I'm expected to *chip in* to someones salary. I have a novel idea: How about hotels pay their employees? Surely they could allocate $2-5 per night per room to pay their cleaning staff. I'm already paying an obscene amount for a night or two in a room. Rooms are expensive and it's insane to say, "what's another $10" -- Well, it's another $10. That's what it is... another $10 I'm not spending. Cleaning the room is literally the job for which they are paid. There are other jobs on the market if they are so inclined to not want to depend upon tips for their income.

No tipping. I am the customer. You are the business. It is YOUR job to pay your staff, not mine. If you don't pay them enough, how is that any fault or business of mine? I'm just the person paying for a service. If you can't afford to pay your staff, charge more for your service. Just don't expect ME to pay your employees' wages. That's not my job. That's your job.

Complaints about poor pay should be addressed to hotel management and should be no business of hotel guests. The U.S.'s tipping culture developed in large part as a roundabout way to further subsidize and enrich shareholders; if the onus is put on guests or customers to ensure employees' living wages, management and shareholders can continue to plunder at will. As for the disgusting or physically demanding nature of the job - nurses too must clean and dispose of human waste, are on their feet for 12 hour shifts and work physically demanding jobs. When's the last time anyone suggested tipping nurses. A similar argument can be fashioned for preschool age teachers. Both of these professions, too, are victims of famously low pay. Face it, by creating a false fight between the have-nots and the have-slightly-mores, the shareholder and professional management class have-a-lots have bamboozled everyone while they pick the pockets of both. No tips; just demand better pay for service workers and support striking workers when they strike for higher wages. 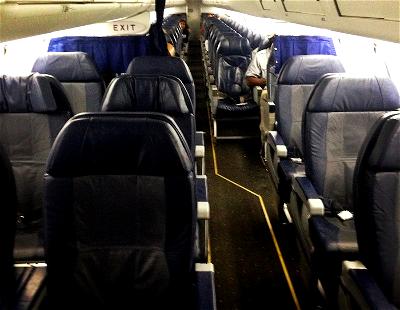 57
My Most Embarrassing Travel Day Ever

20
Complaining about the TSA (in front of them) makes you more likely to be a terrorist/criminal?